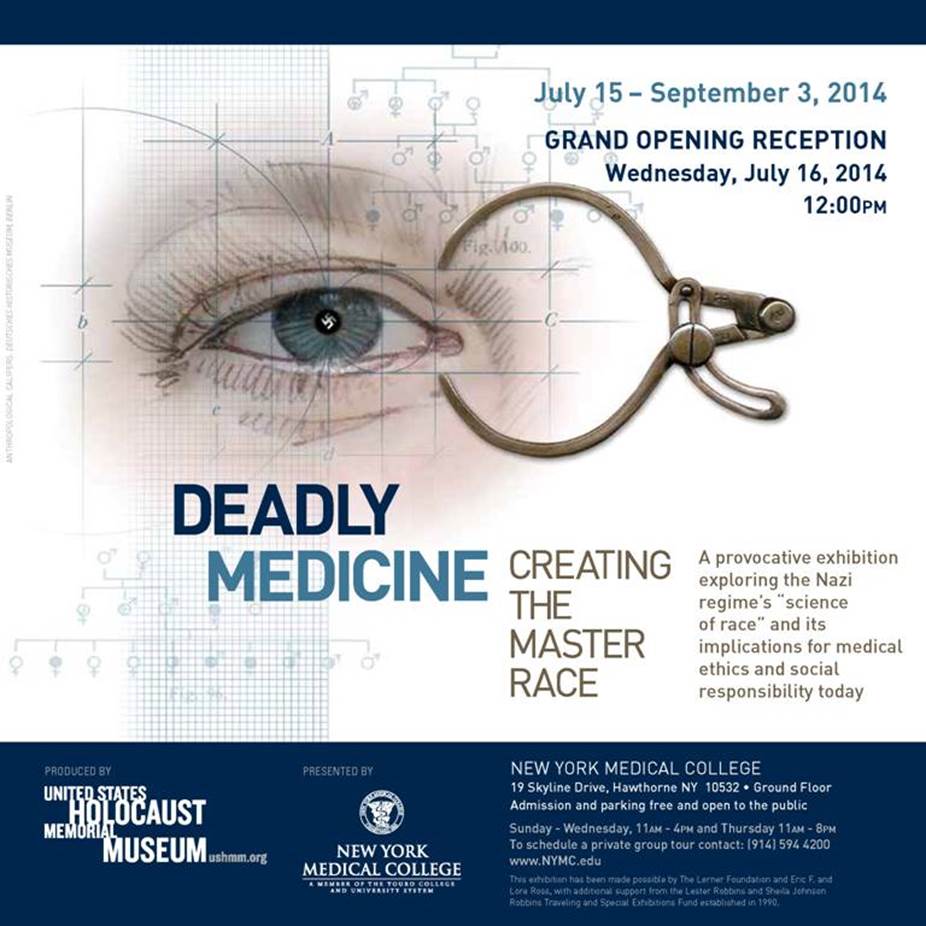 To register for the July 16 reception or to book a group tour, please go to the calendar at  http://calendar.library.nymc.edu/deadlymedicinegrouptours.

Press release from the NYMC Office of Public Relations:

VALHALLA, N.Y., July 7, 2014—The United States Holocaust Memorial Museum’s traveling exhibition Deadly Medicine: Creating the Master Race examines how the Nazi leadership, in collaboration with individuals in professions traditionally charged with healing and the public good, used science to help legitimize persecution, murder, and ultimately, genocide. The exhibition opens at New York Medical College (NYMC) on July 15 through September 3 and is free and open to the public Sunday – Wednesday, 11am – 4pm and Thursday 11am – 8pm at NYMC’s 19 Skyline Drive building in Hawthorne, N.Y., 10532.  Free parking is provided.  For more information please call (914) 594-4200.

A special grand opening event will be held on July 16 at 12:00 pm in commemoration of The Three Weeks which is a period of mourning on the Jewish calendar memorializing tragedies that have befallen the Jewish people throughout history including destruction of the first and second Temples in Jerusalem. The Three Weeks start on July 15and endson August 5 with the fast of Tisha B’Av.

“Deadly Medicine explores the Holocaust’s roots in then-contemporary scientific and pseudo-scientific thought,” explains exhibition curator Susan Bachrach. “At the same time, it touches on complex ethical issues we face today, such as how societies acquire and use scientific knowledge and how they balance the rights of the individual with the needs of the larger community.” Eugenics theory sprang from turn-of-the-20th-century scientific beliefs asserting that Charles Darwin’s theories of “survival of the fittest” could be applied to humans. Supporters, spanning the globe and political spectrum, believed that through careful controls on marriage and reproduction, a nation’s genetic health could be improved.

“Winston Churchill warned us of the darkness of Nazism made worse by “perverted science”. In 2012 NYMC asked to host this exhibit as a means of teaching the dangers of medicine practiced in the absence of a moral compass,” said Edward C. Halperin, M.D., M.A., chancellor and chief executive officer. “We are proud to welcome the community to view this challenging exhibit.”

The Nazi regime was founded on the conviction that “inferior” races and individuals had to be eliminated from German society so that the fittest “Aryans” could thrive. The Nazi state fully committed itself to implementing a uniquely racist and antisemitic variation of eugenics to “scientifically” build what it considered to be a “superior race.” By the end of World War II, six million Jews had been murdered and millions of others also became victims of persecution and murder through Nazi “racial hygiene” programs designed to cleanse Germany of “biological threats” to the nation’s “health,” including “foreign-blooded” Roma and Sinti (Gypsies), persons diagnosed as “hereditarily ill,” and homosexuals. In German-occupied territories, Poles and others belonging to ethnic groups deemed “inferior” were also murdered.

This exhibition is made possible through the support of The David Berg Foundation, The Blanche and Irving Laurie Foundation, The Lester Robbins and Sheila Johnson Robbins Traveling and Temporary Exhibitions Fund established in 1990, and The Dorot Foundation.

About New York Medical College
Founded in 1860, New York Medical College is one of the oldest and largest health sciences universities in the country with more than 1,400 students, 1,300 residents and clinical fellows, nearly 3,000 faculty members, and 15,000 living alumni. The College, which joined the Touro College and University System in 2011, is located in Valhalla, NY and offers advanced degrees from the School of Medicine, the Graduate School of Basic Medical Sciences and the School of Health Sciences and Practice. As a leading academic and biomedical research institution, the College manages more than $34.5 million in research and other sponsored programs, notably in the areas of cancer, cardiovascular disease, infectious diseases, kidney disease, the neurosciences, disaster medicine, and vaccine development.